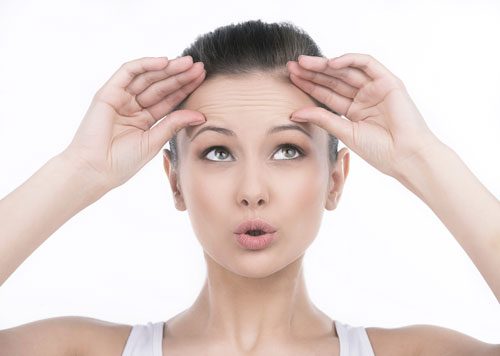 It is hard to reverse the effects of ageing without professional skincare help.

In this article, we will be discussing the effects of ageing skin if nothing is done to delay it or prevent it from happening prematurely.

With ageing, the generation of new cells naturally slows down, even though the number of cell layers remain unchanged. This is evident from the thinner, paler, and more translucent appearance of aged skin, caused mainly by a decrease in the number of pigment-containing cells (melanocytes) present in the outermost layer (epidermis).

Fig. 1: A summary of the progress of skin ageing.

The slow-down of cell generation also affects the production of collagen by fibroblasts – fewer of such cells results in the reduction of collagen and elastin fibres, which in turn lowers the skin’s strength and elasticity. This is known as elastosis, a degenerative change that gives the skin a wrinkled, leathery-like appearance. Moreover, due to the lack of elasticity, parts of the skin will start to droop and sag.

Sebaceous glands will also produce less oil as a person ages. While men tend to experience minimal decrease (most often only after the age of 80), the onset for women is much earlier – after menopause. The lack of oil makes it harder for the skin to maintain its moisture, resulting in dryness and itchiness. With dry skin, wrinkles and fine lines are unfortunately more difficult to avoid.

Additionally, the fat present in the hypodermis layer will diminish, taking away the plump, smooth surface of youthful skin. Fat from the eyelids will also eventually settle into the eye sockets, making the eyes appear sunken. The lower eyelids can slacken and bags can develop under the eyes, and the weakening of muscles that support the upper eyelid can make the eyelids droop.

An Inevitable Doom… Or Not?

Given that the skin acts as a barrier that protects you from the external environment, once this barrier weakens, environmental damage gets increasingly hard to block out. Harmful UV rays, for example, can result in free radicals wreaking havoc on your skin. These unstable molecules are missing electrons from their outer shell, causing them to search for other atoms or molecules that have these electrons so as to become stable again. In doing so, these free radicals break down the skin’s already-lessened collagen and cause damage to other cells.

With further damage crippling the production of aforementioned, the acceleration of skin ageing becomes inevitable.

Thankfully, as mentioned in the beginning of this article, not all hope is lost for ageing skin. Victoria Facelift, the anti-wrinkle and facelift expert has the perfect treatment that tackles not only the superficial problems but also all underlying issues of skin ageing.

Find out more with the next article Victoria Facelift:Tackling Ageing Skin.

Fill up now for better skin!

Fill up now for better skin!

Fill up your particulars right now to look
the age you want WITHOUT injection!